Free Bikes 4 Kidz Detroit is led by a passionate and engaged board of directors and staff. Find out more about them below. Bob is a passionate cyclist who recently retired from a second career teaching high school science. He’s an Engineering and Business School grad from the University of Michigan who spent 20 years in industry prior to teaching, most of that in the automotive sector. He is also Chairman of the Board of Trustees of the WIWD Foundation, another local non-profit organization that honors the memory and legacy of Ikechukwu Onwuzurike through philanthropic projects. In addition to cycling, Bob enjoys traveling with family, playing guitar, photography and is also engaged in environmental causes. Along with the entire Detroit team, Bob loves that FB4K brings the entire community together to give the pure joy of bike ownership to kids every Christmas and helps get them jump-started on a physically and emotionally healthier childhood. After having spent over 35 years in the auto supply business, Larry recently retired from his day job and now does some consulting along with spending more time with family and friends.   Having a wife and three grown children spread across the country he doesn’t lack for places to go.  In addition to playing ‘catch-up’ on rest and relaxation, Larry enjoys exercising, including riding his bike on the Clinton River Trail, and supporting organizations that give back to the community.  Larry is a Board member of the Troy Rotary Club and a mentor for the Oakland County Youth Assistance Program.  Larry looks at FB4K as another worthy cause that will make a difference in someone’s life. Augie Engelhart is a woodworker, metalworker, coach, sailor, and handyman, but at his core: a cyclist. Although an avid road, mountain, and track rider, he most enjoys the bicycle as an everyday means of transportation and a vehicle for change in the world. Despite traveling the globe and cycling in exotic locations some of his fondest memories on two wheels are those of his childhood: exploring the neighborhoods around his home in suburban Detroit and the sense of freedom given to him by his bike. This is why FB4K’s mantra of “Help a kid be a kid” resonates so deeply with him. He holds a B.A. in Mathematics from Michigan State University and his bike-volunteerism includes projects with the League of Michigan Bicyclists, Michigan Scholastic Cycling Association, and too many charitable rides to count. In the summer of 2017 he worked with the Detroit Fitness Foundation on the construction of Detroit’s own Lexus Velodrome. Jody enjoys spending time with friends and family. Having spent over 30 years in the car part industry he feels it is very important to stay actively involved with community projects and help others. He can usually be found outside enjoying an activity or traveling.

Hi, I’m Collier Hardaway, but across the world people know me as 40. I’m an Urban Philanthropist, and founder of two community-serving organizations. Cycling is my love. Helping and speaking for the community is key to my positive vibe. Some people may say I’m a bicycle hoarder.  I like to think of myself as a passionate cyclophile who sometimes has an excess of bicycles and bicycle parts laying around in every nook and cranny. Let’s just say that if I spent as much time riding a bicycle as I do collecting them, I would probably be an olympic cyclist by now. I’m originally from the Windy City of Chicago but have lived in the Detroit area for over 20 years with my wife Amy (a lifelong Michigander) and our three daughters.  I grew up riding, wrecking, finding and fixing bicycles and unicycles. Some of my bicycle related adventures include: riding across the United States (Seattle to Boston), around Lake Michigan (Chicago to Chicago), as well as cycling related exploits in many other states and countries including Australia, Costa Rica, The Dominican  Republic, Mexico, China, Thailand, Vietnam, Italy, Germany, France, England, India, Israel, Egypt, Colombia, Argentina, Peru, New Zealand, Belarus, Poland, and others. I have dumpster dived for more abandoned bicycles than I care to admit, and did I mention that I have a patient wife?  Although I have been fortunate to have a wide variety of vocations from watching cement dry for a park district, to riding a unicycle in the Lyric Opera, thus far my involvement in FreeBikes4Kids Detroit has been my favorite! I look forwarding to collecting, fixing, and redistributing cycles for many years to come. Janet is the Director of Office Properties at REDICO and joined the FB4K Detroit board in 2019. She is an avid cyclist and loves sharing her joy of cycling with the kids of Detroit.

After 29 years of teaching Chemistry at Oakland University,  Art stole his lab coat and retired. When people asked him what he was going to do in retirement he said, “I think I’ll be a bike mechanic” to satisfy his long standing interest in keeping his own bikes in top working order. When FB4K Detroit needed mechanics, and Art needed something to do, the deal was done – now he can fix bikes for others too! When not working on bikes, he rides, tours, plays hockey and walks his dogs. Art attended a United Bicycle Institute course in Oregon this past April to complement his existing bike mechanic knowledge and he recently completed his Level 1 bike mechanic certification. 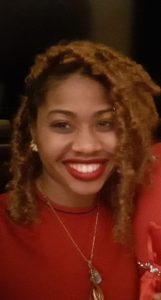 Orelia is currently in her fourth year as a school counselor at a K-8 DPSCD school. Orelia has a passion for exploring. Her love for traveling and riding began at a young age riding around the city with her siblings and friends. Through those various adventures she was able to see the beauty of her beloved city of Detroit. When she became aware of FB4K she knew she had to do all within her power to provide her students with that same opportunity and chance at exploring their beautiful city. Through her personal passion and drive, Orelia has helped FB4K to distribute over 600 bikes to her eastside Detroit neighborhood in the last 2 years. 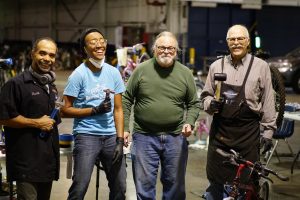 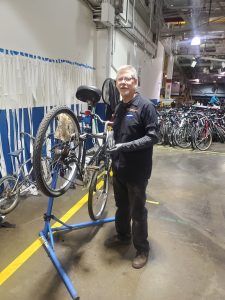 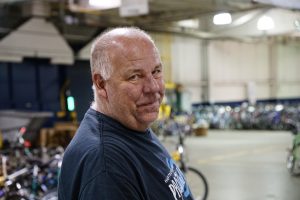 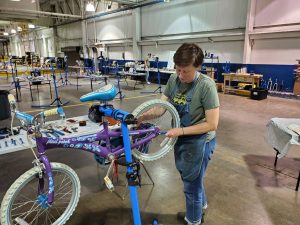 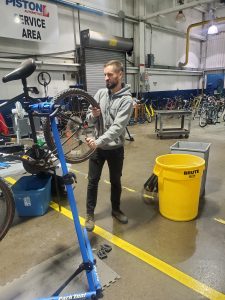 FB4K Detroit’s Pro Mechanic Staff is made up of bike mechanics from various shops across metro Detroit. In the pictures above, top from left to right: David Gonzalez, Nelly Jones, John Hall, Art Bull (Board Member and head of the QC Team); 2nd row from left to right: James Stevenson, Rob Pelkey, Judith Feist and Ted Sliwinski, in addition to Brad Potts (not shown) make up an awesome team with decades of bike mechanic experience that ensures the bikes that we give to kids before the holidays are functional and safe to ride. This group is committed to helping kids and to having fun in the process. They’re helpful in answering volunteer questions and still manage to crank out the bikes at the end of the day. We couldn’t do what we do without this team! 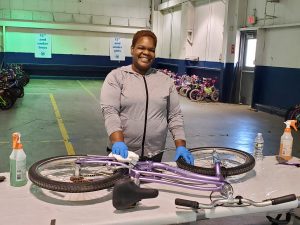 Goldie is one of the founders of The Detroit LaneBangerz bicycle club. She’s been volunteering with FB4K from the very beginning, driving a truck on Collection Day every year, cleaning bikes in her spare time to now being the Warehouse Manager in FB4K’s fifth season. Her greatest passion is seeing happiness and smiles on peoples’ faces, especially the kids. Community service and giving back is something that gives her joy in knowing just the smallest things can make a big difference in someone’s life! 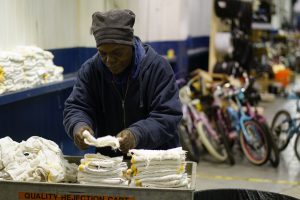 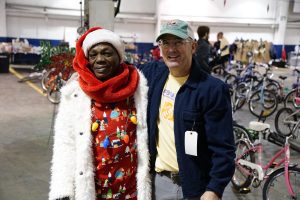 Leshir has been with FB4K since our second year and is part of our FB4K Detroit family. Her dedication to her job and willingness to help out with any task around the warehouse helps make our volunteers’ experience in the warehouse a good one. She has a special fondness and talent for decorating the warehouse around Christmas time and all the wonderful lights and figures that make the kids smile at our bike giveaway each year are there because Leshir took the time to set them all up. Ashia is a dedicated cyclist with a passion for improving the lives of kids in Detroit. She has spent countless hours volunteering to clean and repair bikes as well as working for FB4K Detroit hosting the warehouse. She greets volunteers, makes them feel like part of the FB4K Detroit family and keeps the work areas organized and volunteers functioning efficiently. She is a great example of FB4K Detroit bringing the community together with her outgoing personality and desire to make everyone feel welcome. Andy has been actively involved in the metro Detroit cycling community for over fourteen years. He has worked with many other charitable groups and initiatives while under the banner of Beatthetrain in Detroit. This concept has facilitated building a network of passionate and diverse group of volunteers. “Being a part of FB4K Detroit is just a natural fit for me!”

Mike’s passions include cycling, traveling and spending time with his family.  After graduating from the University of Michigan, Mike began his career as a CPA in a “Big Four” public accounting firm, then spent approximately 25 years working in the global automotive supply industry.  He has previously volunteered with the Boy Scouts and has been a youth baseball, basketball and soccer coach.  He has been involved with the Michigan Marching Band for a number of years as a section sponsor and member of the Elbel Club. Mike is excited to combine his love for cycling and his commitment to community service through the FB4K organization.